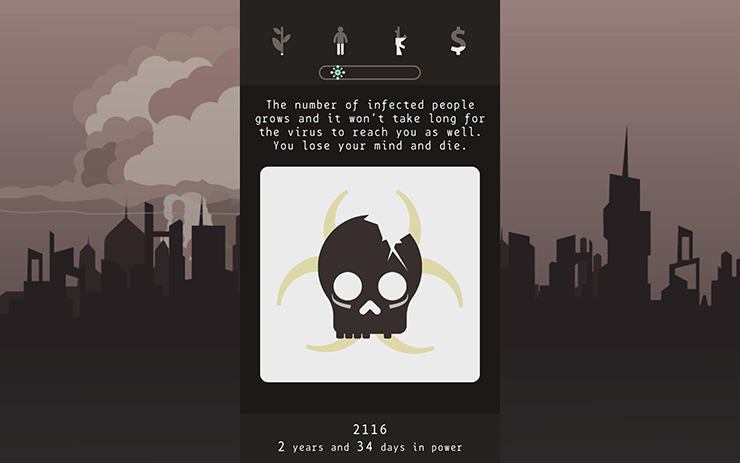 Lapse: A Forgotten Future is the text-based strategy game for Android. Here you will become the leader of the state in the post-apocalyptic world. Everything that happens depends on whether you move your finger left or right. The game was developed by Cornago Stefano and it’s probably based on game Reigns.

As I said you take a lead of a state and you have to keep the four things in balance and that is the environment, the people, the army, the money, you don’t want to have too little or too much if it happens the game will end. To do this, there are events where you have always two choices, each decision increase one group and the other decrease, so you try to keep the balance. You will often encounter the fact that, rather than making the decision that best suits you, you decide to survive the next day. Some decision can give you powerful things that can save you from dying or there is a thing named oracle that shows you how the decision will effect each group. As you play you discover the story, where you can try to change the direction of history and prevent the catastrophe that has happened.

It is even translated into many languages so it is not necessary to be able to speak English perfectly. After some time you can feel a lack of new events as you keep getting the same despite I enjoyed my playthrough really much. The game ran smoothly and I had no sort of technical problem.

The game requires Android 4.4 or higher

Have a nice day, Hynek.